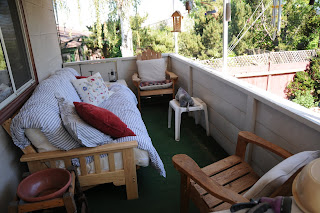 When the neighbors cut down their (perfectly healthy) cherry tree, they left my yard furniture without shade or privacy. I took it as a sign to get on with renovating the back porch, which was being used for storage of accumulated junk. I moved the futon couch out of the house onto the porch. Whoever decided futons should not have handles should be shot. (Laura and I have had this conversation before when we moved her giant marshmallow, and we had two people moving it.) I had to take the frame apart to get it out and down the hall. I am feeling a bit smug that I easily found the directions and original hex wrench that came with the futon frame.

The porch is now about as comfy as it could be. I may just have to sleep out there tonight. Meanwhile, time to make some limeade and settle in with some knitting....
Posted by Purple Fuzzy Mittens at 4:35 PM 3 comments: Links to this post

How the spring has flown by! Between trips for work, trips for fun, and a bout or two of fluish stuff I have become a very bad blogger. 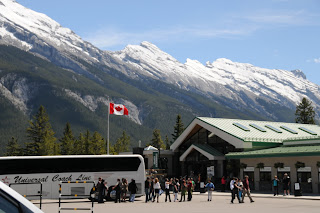 My latest adventure was a trip to Calgary, Canada. I went primarily for work stuff, but I had a couple of days to play at the end. Prior to the trip, the internet weather gurus predicted a solid week of rain. Happily the sun came out for a glorious day-trip to Banff. 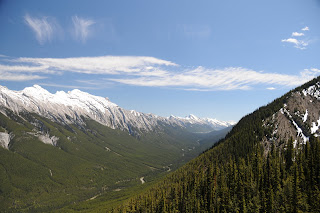 We took the Banff Gondola up the mountain and climbed the long boardwalk trail up to the very top. Amazing view! I took about a zillian pictures and am still going through them. If you go to Alberta, no question - you MUST make the pilgrimage to Banff. The town of Banff is pretty touristy/gift-shoppy, but it does advertise "Canada's Best Ice Cream" (as reported by Readers Digest) at a shop called Cows. I had the "Gooey Mooey" flavor and it was mighty tasty! My favorite shopping was the downtown area of Canmore, a small town on the way to Banff. It had a great little independant bookstore called "Cafe Books" that features crafts by local artisans along with a great collection of environmental titles. I bought a nifty little book, The Incomparable Honeybee, and another hand-thrown lidded jar for my (already full) kitchen counter. 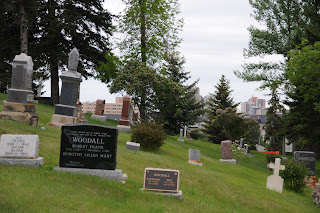 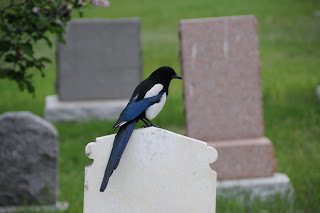 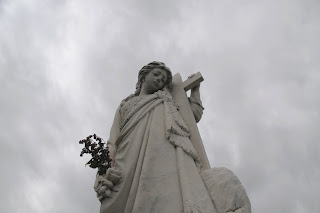 The second play day was spent in Calgary. The clouds had rolled back in and rain was continually threatened. I devoted the morning to photography and spent it exploring the Union Cemetery and the Chinese Cemetery. The Union Cemetery is quite large and parts of it have a great view of the Calgary downtown skyline. I have photographed a number of cemeteries and I was interested in differences that might be found in Canadian cemeteries. With just Calgary to go by, I did notice how few statues or carvings of human figures were to be found among the stones. 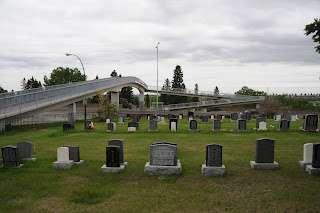 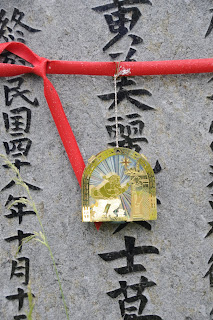 I took the pedestrian bridge over the freeway to get to the small Chinese Cemetery. Although many of the markers contained only Chinese characters, some had dates I could read. Like the Union Cemetery, the Chinese Cemetery dates back to the late 1800s, yet includes relatively recent burials as well. I do not know the details of its history, but its location, size, and condition paint a clear picture of the social outsider status these folks unfortunately had.

After several hours wandering the cemeteries, I decided to get a late lunch at the Reader's Garden Cafe. The Reader's Rock Garden is adjacent to the Union Cemetery and was the serendipitous find of my trip. I only stumbled on it by virtue of it sharing the parking lot with the cemetery. 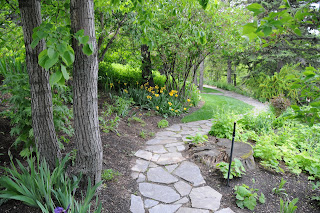 The garden and its cafe are run by the Calgary Horticultural Society. It stretches all along a hillside, with flagstone paths, rock steps, rustic benches and grassy grottoes filled with flowers and shrubs, and trees. Even with the gray skies it was a magical place. The Cafe is in a charismatic old house. I got to sit near a wonderful rock fireplace and eat shepherd's pie made with Alberta-grown buffalo, then take home lemon-poppyseed cake with strawberries to have with my evening tea. Heaven.

Tuesday I had some time free before heading to the airport. I drove south of Calgary to the town of DeWinton to visit Shuttleworks. 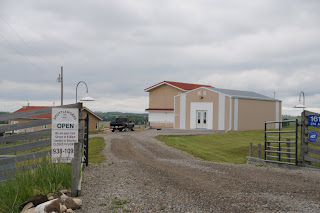 Shuttleworks sells fiberarts supplies from a large metal barn of a building out on a piece of farmland. The modest outside view does not do justice to the wonders within. The place is packed with possibly the best selection of fiber stuff I have seen anywhere. 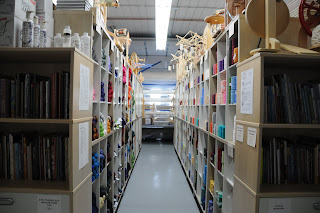 I especially loved the books, which included many I hadn't seen before, and some that I know are out-of-print and hard to find. I added 2 spindles and a sample niddy made by Edward Tabachek to my collection, along with a couple books and a small bag of ultra-white corn silk. I would have bought more if I could have fit it into my luggage. (Sara - notice one of the books being highlighted?!) 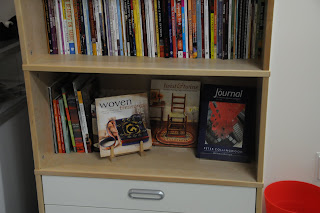 After shopping I spent an hour or so chatting with the owner about everything from the local fiberarts scene to remodeling woes and the Canadian economy. It was great fun and I totally recommend a visit if you are in the Calgary area.
Posted by Purple Fuzzy Mittens at 4:37 PM 4 comments: Links to this post 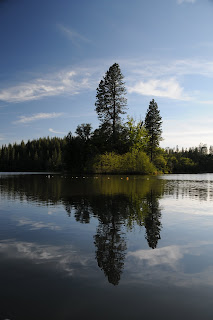 I am miles behind on reporting on the 1st Intermountain Spindle Camp at Lake Francis, CA. You can see my pictures here. Sharon, Heidi, and Birdsong have all blogged on the event. (Thanks, Birdsong, for the great review of my trailer! I love showing her off!) The brief summary of the events is that we all had tons of fun despite cold, rain, and hail. In fact, it was so much fun that we are already planning next year's Spindle Camp! I stayed behind and camped 2 more nights. What a great campground! It even had a restaurant that served a great lobster fettuccine! It was still a bit chilly for sitting around the campsite, so I took a few drives around the area to get in a little photography. The picture above is of the little Lake Francis and taken from a path down from the campground. I also visited the cemetery in Dobbins, and the old downtown area of Marysville. Driving home Tuesday, I stopped by the cemetery in Vinton. For photography, the Vinton cemetery is a bit disappointing, since it is so well maintained. (The tidy state of it says good things about the people of Vinton, but crumbling headstones are a bit more atmospheric.) I am still going through the images, so you will have to wait a bit before they debut on Flickr.
Posted by Purple Fuzzy Mittens at 9:51 PM 1 comment: Links to this post