Posted by Purple Fuzzy Mittens at 10:29 AM 2 comments: Links to this post

I've been watching others come up with fabulous felted (OK, fulled) handbags and I decided to use the concept to make a hot water bottle cover. First I had to find a traditional hot water bottle that I could use in my electricity-less, heaterless travel trailer. This is harder than it sounds, since most folks have apparently switched over to microwavable pads. I eventually found one in the traditional ugly-pink rubber. I dug into my stash and found some hand-painted blueface leicester roving left over from a previous project. For maximum speed and fuzzyness I left the roving unspun and knitted it up as is. Unfortunately I didn't have quite enough. Knowing it would probably be too short, I threw it in the wash anyway. Here it is after a single run through the washer. It was, indeed, too short. On the plus side, it would make a fine bag. But I was out of roving. I did have a ball of the yarn left over from the original project. I hunted it down and blew the dust and cat hair off. Even if the texture would be different, at least the color would match. I knitted the ball of yarn into about 3 yards of 5-stitch I-cord. (For any non-knitting sorts reading this, I-cord stands for Idiot cord, because after a few feet the knitter tends to turn into a raving idiot from the boredom.) I decided to send the I-cord into the wash and also threw the now-bag in for an extra go-around to further merge the colors. I meant to only agitate it a little while, but there was something interesting on TV, and, well.... 2 hours later I remembered to pull it out. Bit of a mistake. The bag was now smaller, thicker, and the rim of the opening was oddly uneven. Hmm... how to recover? Should I just cut my losses and consign the evidence to one of my multitudinous totebags in hidden corners of my fiber room? Taking a lesson from my cats, who firmly believe you can pull off any ungraceful misstep by looking like you meant to do that, I created a braided strap from the I-cord, leaving a longer bit at each end. Then I sewed the longer bits onto the rim in a coiled pattern that emphasizes where the rim bumps up unevenly. Viola! It is now interestingly irregular rather then mistakenly uneven. Just as if I meant it that way.

So I started out to make a hot water bottle cover and ended up with this nifty bag. Life is full of surprises.

Posted by Purple Fuzzy Mittens at 7:18 PM 2 comments: Links to this post Much better!
Posted by Purple Fuzzy Mittens at 9:38 AM 2 comments: Links to this post In a burst of energy I sewed up the trailer's curtain panels. I didn't want the standard gathered curtains because they wouldn't open enough to completely clear the windows. I wanted something bold and bright, yet simple and in keeping with my folk art theme. So I conceived flat curtain panels with metal rings at the corners that could be hung on simple cup hooks.

Finding the metal rings turned out to be the hard part. I ended up using key tag rings, removing the cardboard tag bit. This worked increadibly well, and was really inexpensive. The cup hooks are small enough to not drill all the way through the trailer wall, yet large enough to hook more than one ring, allowing several open-or-closed configurations of the panels, or even rolling the panels completely up out of the way. All the panels are dark purple on the outside so that they will go with the eventual paint scheme. Inside, they are batiks in colors to match the painted table and picture frames. As you can see, I REALLY need to get rid of the blue on the seat cushions. Sigh - more sewing.

Posted by Purple Fuzzy Mittens at 6:50 PM 2 comments: Links to this post

Here are a few pictures from projects underway:

First, here is a picture for Birdsong - I finished my first Delicato Mitt. Definitely not a beginner pattern! I am knitting them from handspun alpaca. Once done, I will overdye them to cut down on the icky pinkness. 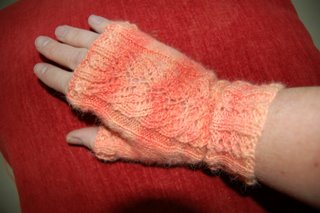 Second, here is a picture for Barb. This is the batik fabric I found for my trailer curtains. I have cut them all out and still need to sew them up. Good thing there is a 3-day weekend coming! 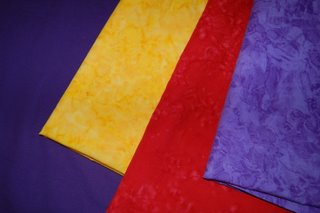 And last, here is another teaser picture of my mystery project. More about that in a later post.
Posted by Purple Fuzzy Mittens at 9:13 PM 2 comments: Links to this post 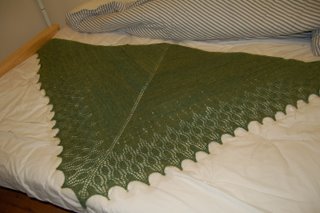 I am happy to announce the successful birth of my Seraphim Shawl. Finishing an actually useful shawl is quite a triumph for me (having started and not completed at least a half dozen). Here it is being blocked on my futon bed. I don't have carpeting, so it is the only pinnable surface large enough. Even so, the ends had to be pinned off the edges of the bed. The yarn is 50% mohair, 50% wool that I bought as pre-dyed roving from BearDog Yarns at Black Sheep Gathering. The color was listed as "Spring Leaves".

My original plan was to spin the yarn for a sweater, but I am much happier having it as a shawl. I like the way the variation of color worked up. Part way through knitting it, I realised my row guage was way smaller than the pattern called for so I added about 20% more pattern repeats. The result is an extremely generous sized shawl. Better over large than over small!
I wanted to take a pretty picture of it outside, but it is still cloudy and muddy and wintery-looking, so the best I could do looks pretty pallid. Trust me, the color is far more vibrant.

Now back to making curtains. I have the fabric cut out and need to start sewing.

Meanwhile, here's a preview of another project:

Posted by Purple Fuzzy Mittens at 3:32 PM 4 comments: Links to this post

The Art of Surprise

Or rather the magic of surprise art. I am very fond of good landscape design, and one of the prime tools of great garden design is the little secret pockets where one can turn a corner and find a hidden surprise, maybe a little fountain, or a piece of sculpture, or even just an exceptional plant. 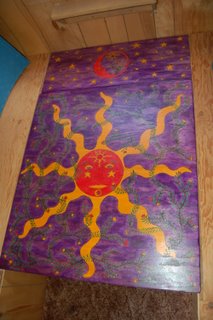 This same principle is found in clothing design when the designer lines the inside of a jacket or purse with a special fabric or color, only to be seen by the wearer, or in brief flashes. I have a plain black nylon tote bag that when unzipped reveals an inside that is blue sky with puffy white clouds. I smile every time I look in it.

When I decided to decorate my little trailer, I knew I would be adding lots of hidden bits of art. 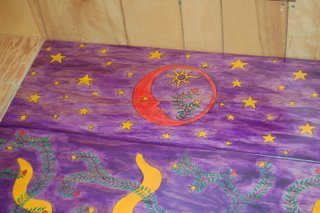 For the most part they would be satisfying only me, but why not? Under the table lives a board that serves to extend the bed area. This board is only visible when the table is put down, but before the cushions are turned to make up the bed. A night time picture was appropriate. I'll see it briefly each night as I make up the bed. A little art just before bedtime should encourage technicolor dreams!

Posted by Purple Fuzzy Mittens at 5:07 PM 2 comments: Links to this post

Anybody who knows me at all well knows that sewing and I do not get along. In fact, I will go to great lengths to avoid it, knitting everything possible in the round to avoid seams. Several years ago, in a fit of good intentions towards decorating, I bought a reconditioned sewing machine. I took it home, placed it in a corner of my fiber room, and there it sat until tonight.

I am proud to say I met the beast and I conquered it! 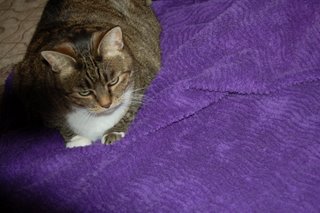 I found this cool purple cotton chenille fabric at Windy Moon Quilts in Reno. It just had to become pillow covers for the trailer! I like how it is sort of both vintage-looking and quirky at the same time. Being 100% cotton it feels great. I bought all they had. When I put it through the wash for preshrinking, it sent purple fuzzies out the dryer vent and across my front yard. After minimal experimentation (and only 1 broken needle) I knocked out covers for 3 pillows - 2 huge ones and one smaller one. I am pleased and proud of how they came out. 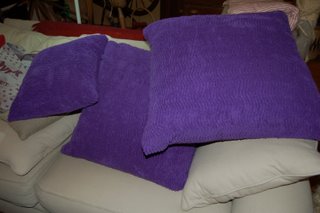 Tomorrow I attempt curtains.
Posted by Purple Fuzzy Mittens at 9:59 PM 2 comments: Links to this post